The English rose’s journey to galactic success in 10 steps.

Unless you’re a Star Wars anorak, you probably wouldn’t recognize her if she walked past you in the street. Daisy Ridley’s got the sort of plain, wholesome English face that makes her blend into the crowd. But in a few weeks she will become one of the biggest stars in the galaxy when she appears in the upcoming Star Wars juggernaut, Episode VII: The Force Awakens.

She first got geeks itching when she appeared in a photo of the new Star Wars Episode VII cast that came out last April.

Fans soon discovered very little. Ridley, aged 23, had her first notable role in Casualty in 2013 – meaning no one in America knew who she was.

So how did the girl, whose scenes in the second Inbetweeners movie were cut, end up doing so galactically well, and so far, far away from her birthplace in central London?

These are the top 10 things you need to know about the girl set to take over the universe, including details on the only scene in which you’re likely to see her naked for a while… and it’s probably not what you think.

Ridley said she was only sent to the school as, in her words, “I was very naughty… my mum thought if I was busy, I’d be better.”

Acting is in her genes

Ridley’s great-uncle was Arnold Ridley, who played Private Godfrey in Dad’s Army. Her dad Chris is a photographer and one of Ridley’s sisters is model Kika-Rose, signed with Models 1 – the same agency that represents Erin O’Connor.

Her big breaks were Casualty… and playing dead

Ridley made her TV debut in the BBC drama, Casualty, starring as a snotty girl called Fran who sets out to enjoy a day at the funfair with her mate Robyn (regular cast member Amanda Henderson) before she gets trapped under a broken ghost train carriage and needs rescuing. 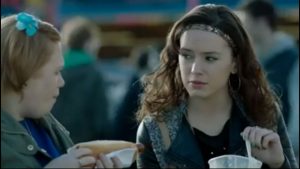 Things got more painful for Ridley in her next TV gig – playing the part of a naked and scarred corpse in Silent Witness. 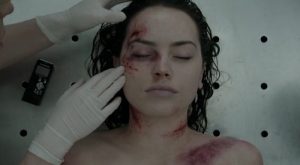 She’s been told to shut it about Star Wars

In one interview Ridley let slip her character Rey is the daughter of Han Solo and Princess Leia. She’s been a lot quieter since about plot developments, as her contract demands. 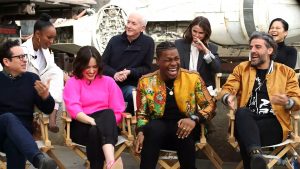 Still, she’s been doing press and said that she tried to be more present and appreciate the filming of this final movie because her previous experiences were such whirlwinds. During the live-streamed event, Daisy Ridley reiterated that she “used to listen to ‘I’ll Make a Man Out of You’ from Mulan” to get into character as Rey. “Just because I love that song. Love the sequence: Mulan finding her strength.”

Ridley may have posted this fairly intimate video on her Instagram of her in bed watching the new Star Wars VII trailer.

But Ridley has gone quieter than she used to be elsewhere on the web. She removed one of her original showreels after getting the Star Wars part, apparently so fans could focus on her new character (or to whitewash previous embarrassing acting efforts.)

“I’m so proud of what I’ve done before,” said Ridley about the deletion. “Everyone wants just to see me as Rey and not as the people I’ve played before, even though the jobs I’ve done before are amazing and obviously led me to this incredible point.”

Spot her in Mr. Selfridge

Along with her Casualty and Silent Witness parts, Ridley popped up as Roxie Starlet in Mr. Selfridge, in which she managed to progress past not being injured or murdered. Her TV CV also features bit-parts in E4 youth drama Youngers and Matt Berry’s chucklesome sitcom Toast Of London.

She was cut from the Inbetweeners sequel 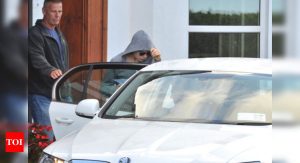 Ridley’s appearance in The Inbetweeners 2 had to be cut due to her Star Wars commitments.

Inbetweeners co-creator Iain Morris admitted he was sad to have to edit Ridley out. “Daisy was in the opening of the film,” he added. “We reshot the opening because the script didn’t work. We desperately wanted Daisy to come back and do it because she’s brilliant and really funny. But by that point, she was doing Star Wars.”

Ridley is still included in the deleted scenes DVD extras, but it’s not advisable to sit through the film.

There will be an opportunity to catch Daisy on the big screen (or, more likely, straight-to-DVD screen) before the prefix ‘Star Wars’ is permanently welded to her name. She stars in low-budget horror film Scrawl, out this winter. It looks almost as good as The Inbetweeners 2.

Her boyfriend’s a rising star 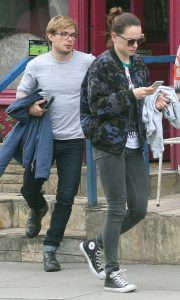 Ridley has been in a long-term relationship for years with chiseled actor Charlie Hamblett. Like his girlfriend, he’s about to be thrust into bigger and better things thanks to his part in The Secret Agent, also featuring Vicky McClure and Toby Jones, out next year.

Ridley loves grime and has appeared in the video for Wiley’s hit, Lights On, looking edgy with a beanie, chain, and non-branded vodka. The irony being that Lights On is a pop tune and not remotely grime.