Just two months before Neil Armstrong and Buzz Aldrin’s famous moon landing in 1969, Apollo astronauts reportedly heard unexplained noises while orbiting around the far side of the moon, deep in radio silence from Earth.

The three Apollo 10 astronauts, Tom Stafford, John Young, and Eugene Cernan, debated whether to tell NASA command on earth as they were concerned: “Nobody will believe us.”

The “weird”, “eerie”, “outer-space-type music” continued for around an hour despite being out of radio contact with Earth for that time.

The three Apollo 10 astronauts were testing out a rendezvous maneuver between the Lunar Module and the Command Module in May 1969, for the upcoming Apollo 11 lunar landing mission.

The “lost tapes” were played in a new episode of NASA’s Unexplained Files which aired on The Science Channel, having been declassified in 2008.

“NASA would withhold information from the public if they thought it was in the public’s best interest.”

The transcripts of the mission remained in NASA’s archives until being declassified eight years ago.

The Unexplained Files offered a number of potential explanations for the noises the astronauts heard, including interference caused by a magnetic field or atmosphere. But, according to experts on the show, the moon has no magnetic fields and not enough atmosphere, which has left the origin of the sounds as a mystery.

However, astronaut Michael Collins wrote in his book Carrying The Fire: An Astronaut’s Journey, that the sounds actually originated from the very ship the Apollo 10 crew were piloting.

“Stafford’s Apollo 10 crew had first heard it, during their practice rendezvous around the Moon,” he wrote in the book.

“Alone on the backside, they were more than a little surprised to hear a noise that John Young in the Command Module and Stafford in the Landing Module each denied making. They gingerly mentioned it in their debriefing sessions, but fortunately, the radio technicians (rather than the UFO fans) had a ready explanation for it: it was interference between the Landing Module’s and Command Module’s VHF radios.”

Astronauts on the Apollo 11 mission reportedly heard similar noises when they orbited the moon two months later, but dismissed it as radio noise. 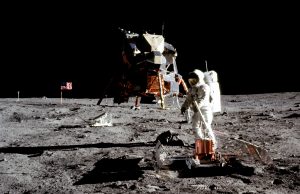