Spoken as something approaching stoners’ gospel, it’s long been the belief of the weed-loving community, but does the science back up such claims?

If there is one person that knows the truth, it’s Doctor D.

A medical director of one of the leading cannabis clinics in the Los Angeles area, the good doctor has plenty of experience in answering questions about cannabis smoking and sex.

“I see 100 patients a day and the majority of them are well-spoken, hard-working individuals, retirees, athletes, businessmen, and women,” Doctor D tells Loaded. “They all choose an inexpensive plant to medicate with over ibuprofen, narcotics, and sleep aids.”

He explains the fine line between genius and madness when it comes to making love on marijuana.

Why is there such a debate around cannabis use and sex?

The effect of medical cannabis on men’s sexual health has conflicting reports from the literature versus the anecdotal reports from patients. So, the takeaway point for the consumer is that there are always risks and benefits from using any substance.

What do patients tell you? 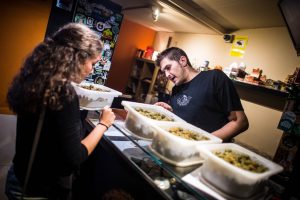 What does the research say?

How can we reconcile these differences?

What conclusions can we draw from this?

Occasional use of marijuana is unlikely to lead to harmful effects on sex drive and may relieve anxiety, which inhibits performance for both men and women as well as increasing sexual pleasure.

However, it is important to remember these are observational studies, where some people note much more pleasurable sex – but there are also people who noted that they felt less like having sex.

Is there any hope for those seeking a middle ground?

There also seems to be a sweet spot with a lighter use of cannabis-producing better sex, then being really “stoned”.

With that in mind, medical marijuana seems to be a reasonable and safe substance to use in moderation to help people have more enjoyable sex lives.

Additionally, new topical oils containing THC meant to be applied to the female genitals have been studied and have been found to increase the female’s physiological response to sexual contact.”

Are a lot of couples missing out on the benefits of marijuana in the bedroom?

Absolutely. Many more couples are still avoiding trying cannabis in the bedroom due to stigma and outdated laws. People like me are on the bleeding edge.

US-educated doctors are speaking out that people have the right to try an inexpensive and in many cases plant with fewer side effects than most pharmaceutical products.

You can find out even more about cannabis use as part of a healthy lifestyle by following Doctor D (Don Davidson MD) on Twitter @drdlifestyle.