This is not recommended reading for anyone currently sitting on the toilet.

It might sound like the sort of story you hear from that weird bloke in the pub that used to sell you Nokia 3310’s on the cheap and without a Sim card but apparently a bloke in Thailand was bit on the dick by an even bigger snake (whey!) this week. 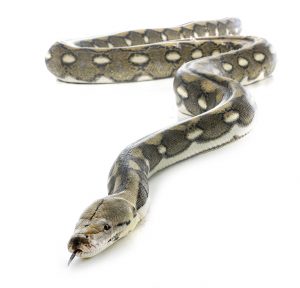 Attaporn Boonmakchuay was enjoying a day like any other when the snake attack occurred. 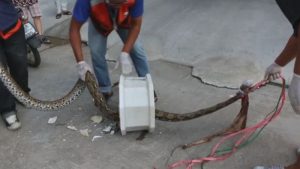 The 38-year-old was busy laying some cable (that’s slang) in his bathroom when to his utter astonishment and shock a large python emerged from the toilet bowl and did the unthinkable – it sank its sizeable teeth directly into his genitals.

Speaking to Thailand Channel 7 news, Boonmakchuay revealed that he struggled with the three-meter python, which was attached to his penis, for a good half an hour.

“I fought it. I called my wife and she went to get the neighbor,” he explained. “It took about a minute for the neighbor to get here. And all of a sudden, while I was holding it, it began to lose some strength so I used my hand to prise open its mouth. Then the snake released its grip by itself.”

Having fainted as a result of the blood loss, Attaporn was taken to a hospital, while the relevant authorities dealt with this monster of a snake.

And by that, we mean the python, not his penis.

Anyway, it looks like Boonmakchuay is going to make a full recovery, thanks in no small part to the fact the snake failed to do any serious damage to the urinary tract.